The Van Gogh museum in the Netherlands is a very popular tourist destination that is visited by tens of thousands of people every year. The museum has the paintings of the world renowned artist Vincent Van Gogh.

Below, we explore some of the most popular Van Gogh paintings in the museum.

Wheatfield Under The Thunderclouds

The 50.4 cm  101.3 cm oil painting was completed in July 1890. It was one in the series of paintings that Van Gogh completed in the last days of his life. The painting depicts a vast field under the dark sky during a thunderstorm.

The elongated format of Wheatfield under thunderclouds was something unusual and in this painting, Van Gogh expresses sadness and loneliness.

The 95 cm  73 cm oil painting was completed on January 1889. It is one of the most famous Van Gogh paintings.  Except for three shades of yellow, Van Gogh did not use any colors in the painting, demonstrating that an image can be created with multiple variations of a single color without losing a bit of elegance.

For Van Gogh, the sunflower paintings communicated gratitude. He painted five copies of the sunflowers and one of them is currently in the Van Gogh museum.

With dimensions, 32.5 cm  40.3 cm, The Sower was painted by Van Gogh in November 1888. Van Gogh was interested in sowers and made over 30 paintings and drawings on the same theme. The Sower was painted using colors that expressed emotion and passion.  The sky was painted greenish-yellow while the field was painted purple. The bright yellow sun resembles an aura around the sower giving the impression that he is a saint.

Often claimed as Van Gogh’s last work, the Wheatfield with crows having dimensions, 50.5 cm  103 cm is one of the most popular works of the painter. The crows, the dead-end path and the menacing sky are said to represent the end of life that he felt was approaching. But this seems to a widely believed myth. In fact, Van Gogh made many other paintings after this one.

Powerful color combinations are used in the painting: yellow-orange wheat contrasting the blue sky and the green bands of grass intensifying the red shade of the dead-end path.

The Van Gogh museum is dedicated to the works of Van Gogh, as well as his contemporaries. 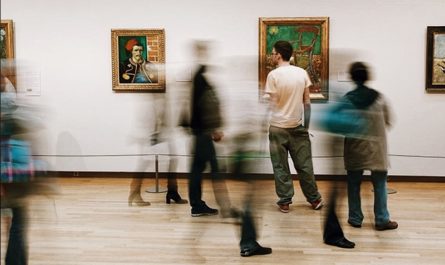 A Brief Read Before A Van Gogh Museum Tour

Best Museums In Amsterdam For You To Visit